Here’s a guest post that I am so happy to be able to share. I have been reading Scott’s book for a few days now, and it is so good. I would encourage you to take a look and see if this can’t help you be a more effective leader.

Fight the Fear of Failure in These 8 Ways

I’ll never forget the day I proposed to my wife. We were together with my family out on the bay celebrating a milestone birthday for my dad. I was so nervous–I don’t like to fail, and I was up against rejection that she wouldn’t say yes, as well as setting off on a course in which, theoretically I could fail.

I felt hot, then cold, then hungry, then not hungry. I can’t imagine what my now-wife must have felt. We took a boat cruise, and I decided to go for it in the middle of Alexandria Bay. Were we in Canada? Were in the U.S.? All I know is that she said yes.

If I hadn’t broken through my fears, I could have missed out on one of the greatest things in my life.

Fight the Fear of Failure in 8 Ways

Take comfort in famous failures. Walt Disney was fired from his first job for a lack of creativity. Twelve publishers rejected J.K. Rowling’s Harry Potter and the Philosopher’s Stone before it became one of the best-selling novels of all time. It’s ok to fail at something–that’s how you break through to the biggest successes. Google Glass debuted to much fanfare, only to miss the mark commercially. But instead of giving up, Google tried again and created an Enterprise edition, expected to corner the ever-growing market for glasses, which are predicted to proliferate factories and warehouses by 2025.

Recognize there are three ways to fail: If you quit, don’t improve or never try.

Google didn’t give up the smart glass market, they tweaked it. J.K. Rowling didn’t give up after all of her rejections. She kept shopping her book to publishers. I got a girl who was way out of my league to marry me. What if I hadn’t tried?

Remember that failure is an event, not a person.

When you think of Kevin Spacey, you probably think House of Cards, not Fred Claus. Starring in a movie with Ludacris was maybe a fail, but his acting career isn’t.

Know that failure doesn’t happen to you, it happens for you.

Hershey’s was Milton Hershey’s third attempt at starting a candy company. He didn’t give up because he believed in his vision of milk chocolate for the masses. Now he has his own town.

You don’t suffer when you fail, your ego does.

Opinions are like, uh, navels. Everyone has one. Don’t let the possibility of a negative opinion dissuade you from what you’re called to do. Remember, failure is an event. It’s not about you. (But it is ok to bask in the glory when you succeed.)

Your fear of failure should inspire you. Don’t be afraid of it. It’s telling you something is worth it.

If it didn’t matter, you wouldn’t care. I don’t really care if I fail at grocery shopping. Or fashion. I did care when I left corporate life and struck out on my own as a speaker/coach/author. The gravity scared me and motivated me to go all in.

Consider failure a key part of your portfolio.

Sure, you need at least one failure to bring up in your next job interview when you’re asked, “What have you learned…” That’s not enough. Have you tried something hard enough to have truly failed at it? NOW you are learning.

Ask yourself if you have done your homework.

Don’t run a marathon if you can’t run a 5k. Do study the market for your new product before you launch it. Do read case studies of similar projects. Don’t wing it and make failure more likely!  Do your due diligence.

Fight through the fear of failure that is holding you back from your dreams. Reject the inner voice telling you that you can’t do it, or won’t do it, or shouldn’t do it. 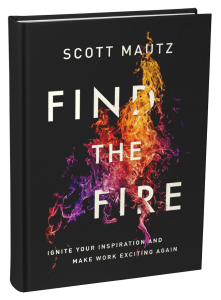 To reignite your inspiration at work and life, buy Find the Fire today.

Scott is the CEO of Profound Performance – a keynote, workshop, coaching, and online training company that helps you “Work, Lead, & Live Fulfilled”. He is also a Procter & Gamble veteran who ran several of the company’s largest multi-billion dollar businesses, including their single largest, a $3 Billion Dollar division.  At P&G, Scott consistently transformed business results and organizational/cultural health scores along with it.
Author of upcoming book, Find the Fire: Ignite Your Inspiration and Make Work Exciting Again, and award-winning keynote speaker and author of Make it Matter: How Managers Can Motivate by Creating Meaning, a book that’s been named “The 2016 Leadership Book of