Originally published on the Institute for the Future blog

An interview with Sara Hendren

When talking about the future of wearable computing, many people assert that it presents huge opportunities for assistive technology. But what is “assistive technology”? The standard definition is a tool, such as a hearing aid, designed to restore or bring to the level of ability of a “normal” person. But designer and artist Sara Hendren argues that normal is subjective and questions the idea that we should strive for normal. Future Now sat down with Hendren to learn more about her perspective that all technologies are assistive—they allow us to do things we couldn’t do on our own—and the design insights this way of thinking generates. 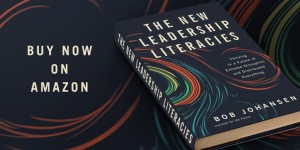 What do we gain by calling some things assistive technologies and other things just technologies?

Language matters. Historically, assistive technology has been part of fixing bodies that are broken. People who use them are seen as medical subjects needing a kind of proxy, a tool to get closer to a version of normal that the culture has held up as the life worth living. I think it’s important that [not only] in the language, but also conceptually, we take another look at what alternate views of the world might we gain if we think of all technology as assisting various bodies to do various things.

No matter how limited the mobility, no matter how few senses are being deployed, the body is radical and adaptive. Design technologies let those bodies do the things they want to do, especially as self-defined by people in those bodies, instead of a top-down approach, presuming a kind of cultural normalcy.

Could you give an example of a project or design that comes out of this perspective?

I’m a huge fan of SpokenLayer, which makes written, visual text on the web into audio text with broadcast-quality sound. The guy who started this is dyslexic, and he grew up using talking books. That gave him this idea—even a sighted person would want content on the web that’s now strictly visual to become audio.

Looking closely at the assistance required by what you’d think of as an extreme user is a really rich and generative research source—looking deeply will provide more help for more people more of the time. You’re using people with atypical bodies and minds and seeing them as a rich resource of knowledge that can help open up a lot of avenues for technologies we should rethink.

What do you think are the primary questions we should ask about this technological advancement and how we design for people with this kind of tech?

I’m excited to see, for instance, what the Institute for Human-Centered Design is creating in the User Expert Lab. They’re trying to have this large database of people with all kinds of bodies, and cognitive and sensory organization, on hand so they can contract with industries. Having people be the experts on their own capacities is the way to do it.

I think primary on our minds should be, “What makes people’s lives possible in the most daily way? Who can do their job more easily as a result of this technology?” In India, they’ve been building recycled rubber—kind of one-size-fits-all—lower limb prostheses. How are you going to compete with a million recycled rubber low-tech limbs given away for free? Dig deep into these conditions and make them benefit everyone. Make a lot of money doing it. Do it in a high-tech way, and do three or four loss-leader projects.

Also spend some time doing these other kinds of projects that help people think in generative, interesting ways about bodies.

I think sometimes the biggest promise can be these assistive and adoptive applications. If you were in more conversation with more people, you’d learn about these as market opportunities and ask, “How do we do the right thing to make the world that we want to live in?”

I think it’s possible to do both if you dig deep in a user-centered way and try to give it levity and abstraction. What can we learn that would keep this thing as open as possible? When the iPad came out, a lot of tech-savvy people went, “Nobody who does something productive on the web will use this.” Remember when all of this suddenly became a game-changer around autism?

So I think we dig deep, certainly into atypicality, but also reconsidering ways we’ve decided that interaction with disability could be a rich resource. Abstracting from a particular user or situation can often be a game changer. Weird, specific, and deeply embedded in culture—the lessons are there for us.

As a research manager at IFTF, Ben uses insights from his background in journalism covering issues of race and inequality to explore how well-being is shaped by social and environmental contexts. He has researched the future of food technology, environments that enhance well-being, and the design of healthy places, and he has an ongoing interest in narrative and health, the meaning of place, and equity and social justice. In addition to his work at IFTF, Ben contributes to the Nichi Bei Weekly and edits the National Japanese American Historical Society’s official magazine, Nikkei Heritage.

Bob Johansen is a distinguished fellow with the Institute for the Future in Silicon Valley. For more than 30 years, Bob has helped organizations around the world prepare for and shape the future, including corporations such as P&G, Walmart, McKinsey, United Rentals, and Syngenta, as well as major universities and nonprofits.

The author or co-author of ten books, Bob is a frequent keynote speaker. His best-selling book Get There Early: Sensing the Future to Compete in the Present was selected as one of the top business books of 2007. His latest book is The New Leadership Literacies: Thriving in a Future of Extreme Disruption and Distributed Everything discusses five new leadership literacies—combinations of disciplines, practices, and worldviews—that will be needed to thrive in a VUCA world of increasing volatility, uncertainty, complexity, and ambiguity.