How the Administration Lost Their Most Amazing Teacher

She was the most amazing teacher I had ever known. Her name wasn’t Diane, but that’s what I’ll call her.

Diane volunteered for almost every committee. She wanted to help out in any way she could. She was at every school game, cheering her students on from the sidelines. Her students loved her, and they learned from her. She built great relationships with her students as well as with her colleagues.

When a teacher was needed to cover a class for someone who called in sick at the last minute, Diane never refused to give up her prep period to fill in.

She opened her classroom before and after school for students who needed some extra support or time to get homework done.

Diane was administration’s favorite teacher. They secretly wished that all their teachers were like Diane.

Diane was asked to take on a leadership role, serving as Team Leader, then Department Head. Her responsibilities grew, and it was a rare day when Diane wasn’t one of the last ones leaving the campus.

In appreciation for Diane’s efforts, she was awarded the Teacher of the Year award for her school.

After three years at her school, however, Diane left to take a position at another school.

The administration was surprised when Diane told them about her decision to leave. It was truly a sad day for the school.

Diane gave being closer to her family as a reason for leaving. The commute was just too long.

The administration understood her decision, but they had a feeling there was more to it.

Although the administration thought she was the best teacher on campus, they never told her. They knew she stayed late almost every day helping students or lesson planning, but they never let her know that they knew. Parents would tell the administration how much their children loved being in Diane’s class, but Diane never heard it from the administration. When Diane would ask for extra supplies for a particular project she wanted to do, the administration told her that they would have to check to see if it was in the budget, and when it wasn’t, Diane purchased the supplies out of her own pocket.

Diane saw how the administration never said anything to the teacher across the hall who had poor classroom management, came to school right when the morning bell rang, and left right after the last bell.

Diane seldom saw the administration. The only time an administrator visited her class was to comply with the evaluation process. Most of the time the administrators were in their offices, busy with important reports or emails or meetings.

Diane loved teaching. She just didn’t love it as much anymore. She began to wonder if a change of scenery would help.

She applied for a transfer, and as with all amazing teachers, hiring her was a no-brainer.

It was a great loss for the school, for the administration, for the students.

Just when the administration was beginning to see a change in school culture, the greatest influencer of that culture left.

And the administration blamed Diane’s commute.

As you may have already guessed, this story is a work of fiction.

There is no actual Diane, but I wonder if you were comparing her to some of the teachers on your staff.

Every school has a Diane. Some have a couple, but how close are they to leaving?

Whether your top teachers leave for a change of scenery depends a lot on how much you show them that they are appreciated. One large recognition a year is good, but a hundred small acts of gratitude will keep that teacher motivated to keep being amazing at your school. 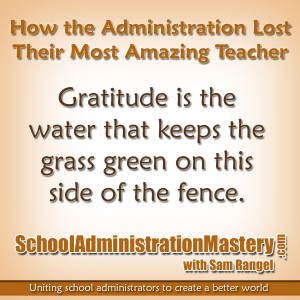 If we don’t make time to acknowledge the work of your great teachers, soon we’ll be left with only the good ones, or even worse, the poor to mediocre ones.

“What gets recognized, gets repeated.” – Lou Holtz

By recognizing exemplary teachers in your school, you send the message that their performance is what you want repeated in others.

In education, we can’t give bonuses or extra pay for increased performance, like they do in business. For this reason, keeping our top teachers from looking for greener pastures, means that we have to keep our pastures green with other means of motivation.

“Imagine a world where almost everyone wakes up inspired to go to work, feels trusted and valued during the day, then returns home feeling fulfilled at the end of each day.” – Simon Sinek

Gratitude is the water that keeps the grass green on this side of the fence.

We, the school administrators, do the watering.