Why I Need to Get an Oar for my Office

Beyond the horizon, across the vast expanse of the ocean, the captain envisioned a new world. He was certain that a better world existed, but he just needed to get there. He knew he couldn’t get there without some help. As strong as he was, and as determined as he was, the distance was too great for him to get there by rowing alone.

So the captain enlisted some sailors to join him on the voyage. He shared his vision with them. He told them that there was a better world somewhere out there, and that he needed them to join him in rowing toward that world.

They asked him if he had ever been there, and when he said that he hadn’t, the sailors began to lose their motivation to continue.

Then the captain assured them that during the voyage, he himself would be rowing. He would keep reminding them of their goal. He would provide them with whatever support they needed. He would encourage them with praise and recognition.

He told them that getting to the new world will not be an easy voyage. It will take time, sacrifice, and perseverance, but that there was great reward when they reached their goal. He reminded them that he would be with them the entire way, rowing right alongside them.

One by one, the sailors grabbed an oar and took their places. There were a few who still were not convinced, but most of the sailors believed in the captain’s vision. A few oars remained piled in the corner, unused, but the captain knew that with continued progress forward, eventually, unconvinced sailors would come around.

The captain, then took his place at the front, grabbed his oar, and began rowing. The other sailors joined in, and together, the captain and his crew began their voyage to a new world.

I need to get an oar.

I want to place an oar somewhere in my office. 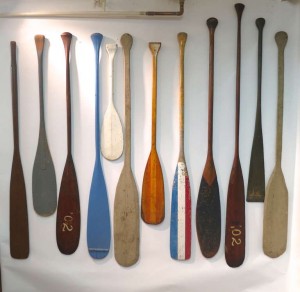 The oar is a symbol, of course. The oar belongs to that teacher who still hasn’t decided to row with me and the rest of the staff toward our vision.

The oar is a constant reminder that I have work to do.

As the school leader, I need to have the vision of a school that doesn’t exist yet. I need to first see it in my mind, and then I need to do what it takes to get us there.

Yes, I know this seems a bit unrealistic, but that’s what leaders do, they dream big. It’s not enough, however, to dream. Leaders have to wake up and start making that dream a reality.

The problem is that the leader cannot be the only one rowing.

Too many times it seems that a school leader is rowing alone. They have just enough teacher support to keep the boat afloat, but not enough to go anywhere.

We need others to grab an oar.

To do this, it’s important that we do our part as the captains of our ship.

Time to go get an oar for my office.