I am currently reading David Rock’s book, Quiet Leadership, and it’s quickly becoming one of my favorite books. Although I’m not finished with it yet, I wanted to share something that I’ve learned from the book.

David has done a lot of research on the brain, and how it works, and I’ve found it fascinating.

One concept that he writes about is the power of positive reinforcement.

David writes that most of us are our own worst critic. We have fears and self-doubts that keep us from reaching our true potential.

He shares a formula: Performance equals potential minus interference.

He shares that it’s more than just emotional, but actually biological. According to David, our brains get clogged up with these fears and doubts, and our paths to success get blocked. (Note: This is my very simple paraphrasing of what David writes.) 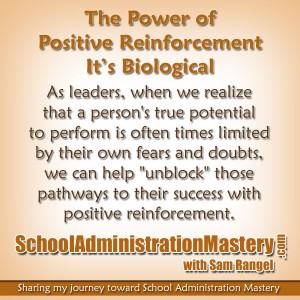 As leaders, when we realize that a person’s true potential to perform is often times limited by their own fears and doubts, we can help “unblock” those pathways to their success with positive reinforcement.

What happens, however, is that in many cases, we want to correct people when they make a mistake. We focus on what’s wrong, and based on David’s book, all that does is further block their pathways.

For example, I recently taught my daughter how to ride a bike. She was afraid and nervous as usual, but instead of telling her what she was doing wrong, I focused on giving her praise for trying, and even when she fell, I encouraged her. I was surprised at how fast she was riding on her own. I don’t know if it was because she is just naturally talented or if the fact that her fears were not compounded by my criticism.

I believe that maybe it was a little bit of both.

What David writes is that our positive reinforcement actually has the effect of eliminating what’s blocking the pathway to success. It calms down the neural activity of our brain to allow it to perform better.

We need to encourage more. We need to praise more.

David writes, “If we want to transform people’s performance, we need to master the skill of acknowledgement.”

So how does this relate to us as school administrators?

We want our staff to take risks, to try new things, to stretch themselves, to perform at a higher level. For many, this is not easy. The fear of failure and their own personal self-doubts hold them back and keep them the from reaching their true potential. Nobody wants to fail, but if we are providing them with constant praise and positive reinforcement, we will be able to break down the biological barriers to their success.

We need to be leaders who “accentuate the positive.”

I would encourage any leader who wants to pull the best out of their staff to read David’s book.

Building Trust, Communication, Leadership, School Administration, School Culture, Success
Why I Need to Get an Oar for my Office
How Every Student Will Participate in the Promotion Ceremony This Year